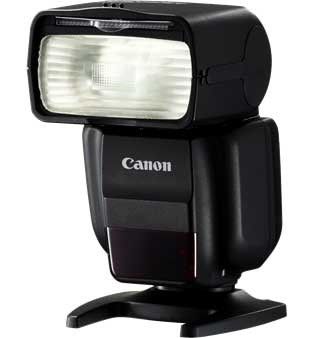 SKU
Canon-Speedlite-430EX-III-RT
Be the first to review this product
Special Price $462.00 Regular Price $539.00
Overview
Now that the 430ex-rt has been discontinued we strongly suggest that you look to the Godox 685c Flash for way more power and if you want a trigger the XproC is about $100.
Details

The Canon Flash units are good but not up to twice as good as Godox 685C flash units. Check them out on the links on this page.

The Canon 430ex III (version III) with RT (radio transmitter) is one of Canon's Speedlites. In my opinion the cheaper flashes such as a the Canon 320ex and 270ex are really toys. The only choices really are this one (or without RT) and Canon 600ex Speedlight Flash units.

We will make our own Video Review soon but in the meantime, here is an unboxed of the new 430ex III RT Speedlight Flash.

Canons introduction of radio flash has been a little slow in coming however it is slowing making its way into the Speedlite 430 range. The R-T being the ability to use the flash as a master and a slave instead of the previous ability of only a slave.

There is an increased range of bounce which is always going to be a good thing. The new 430ex III-RT has a faster recycle time. Please however, always use quality rechargeable batteries such as the Sanyo Eneloop as single use AA's are pathetic when it comes to recycle speed on any high drain

Pop into our Gold Coast camera store & warehouse or order online. We look forward to being at your SERVICE Australia wide.

Check out the specs on the Canon site here

Related Products
Check items to add to the cart or
Top