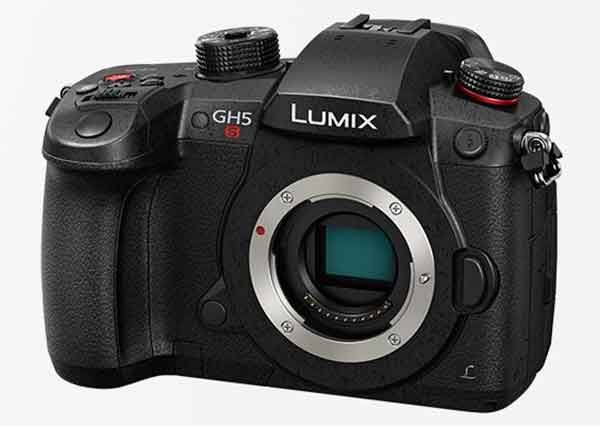 Usually, with a conventional single native ISO, noise levels rise when sensitivity is increased. However, the newly developed image sensor implements dual circuits able to switch to high native sensitivity before gain processing. This means you can achieve beautiful footage with suppressed noise in low-lit situations

The LUMIX GH5S sensor handles multiple aspect ratios; 4:3, 17:9, 16:9 and 3:2. Thanks to broad margins of effective pixels, focal length does not change in these aspect ratios. Available for still photography, 4K and C4K video, and in Anamorphic mode, this function allows you to fully leverage the angle of view of the lens for truly stunning image expression!

The LUMIX GH5S brings game changing internal 4:2:2 10-bit C4K/4K video recording. For example, 10-bit will render all the subtleties of graduated skies and sunsets without the banding so prone to 8-bit. The power of having film creation capabilities inside the camera sets a new precedent in guerilla style filmmaking. And you can record 4:2:2 10-bit to SD card whilst simultaneously feeding the live signal thru a full-size HDMI port* connected to an external monitor or recorder. 4:2:2 10-bit recording enables faithful colour and grading fidelity with over a billion colours and four times the tonality of 8-bit to match professional intent.

The LUMIX GH5S is capable of 4:2:2 10-bit real-time image output to an external monitor or recorder via an optional HDMI cable (full size TypeA), while simultaneously providing an internal 4:2:2 10-bit recording*. It is suitable for professional video making that requires
accurate monitoring of the imagery or high quality recording to external codec devices (such as ProRes). A cable lock holder for the HDMI cable is bundled with the LUMIX GH5S to prevent unplugging problems on location.

The original LUMIX GH5 made it possible to record 4K 60p/50p video on a DLSM camera. Now, to greatly extend your creative possibilities, the LUMIX GH5S takes this even further and, for the first time ever**, includes Cinema 4K (C4K: 4096 x 2160) 60p/50p* video recording . Moreover, there is no limit*** to the recording time, not even when shooting FHD or 4K video. (Subject to SD card capacity and battery life)

The LUMIX GH5S supports a wide range of professional applications, such as web, TV, DVD/Blu-ray and digital cinema production. It features a plethora of video formats and bitrates to record at up to 400Mbps (ALL-Intra) or 150Mbps (LongGOP (IPB Compression)). The system frequency can be selected from 59.94Hz (NTSC), 50.00Hz (PAL), or 24.00Hz (CINEMA). Operation is also enhanced by three video control panels Shutter Duration/ISO, Angle/ISO, or Shutter Duration/dB. This provides solid support for professional worldwide video production.

LUMIX's renowned low-light AF performance has evolved to enable shooting down to the level of -5EV. This allows you to focus precisely even under the lighting of a starlit sky, ideal for shooting nighttime nature scenes and documentaries.

The LUMIX GH5S is built like a tank to withstand even heavy use out in the field. It is freezeproof down to -10-degrees in addition to splash / dustproof construction thanks to weather sealing on every joint, dial, and button.
A magnesium alloy full diecast armour frame makes the body lightweight yet durable while bringing ruggedness to the compact size. This camera can go everywhere you can.

The LUMIX GH5S is equipped with dual SD card slots for larger capacity recording and efficient file arrangement. Relay mode allows you to swap a full card out for an empty card so you can record virtually endlessly. Backup mode allows you to record continuously on one card, while you start and stop recording on the other card. Simultaneous record mode duplicates your recording on both cards. Both slots are compatible with high-speed, high-capacity UHS-II Video Speed Class 60 cards for high bitrate video recording.

A super high-resolution 3,680k-dot OLED LVF (Live View Finder) brings gorgeous visibility and makes for perfect framing even under direct sunlight. A high 0.76x magnification (35mm camera equivalent) makes it easy to see image detail, and a smooth display at 120-fps and high-speed response with minimum time lag further advance visibility. Best of all, the OLED LVF ensures your pictures match up to exactly how you intended them.

A huge 3.2-inch LCD monitor with a resolution of 1,620k-dot approximately gives you a crisp live view and high visibility even in sunny shooting conditions. It adopts RGBW (Red, Green, Blue, White) pixel structure to feature even higher visibility in sunny outdoors. The tilt/swivel capability gives you the freedom to find unusual perspectives while maintaining easy operation and full image control. The monitor has Touch Focus control to allow instant focus by simply touching the subject on the screen. Plus, with Touch Shutter control you can point your finger at where you want the focus to be and it will release the shutter automatically.

The Bluetooth 4.2 (Low Energy) enables shutter release and video record Start / Stop without physically touching the camera. It also enables full-time connection between camera and smartphone with low energy consumption. After shooting, it automatically switches to Wi-Fi connection, transferring data to your smartphone. The Wi-Fi 5GHz (IEEE802.11ac) makes the transfers incredibly fast. You can use Panasonic's LUMIX Image App for Android / iOS to control shutter and other settings.

The LUMIX GH5S allows tethered shooting via USB with "LUMIX Tether" PC software. It enables camera control and shooting while checking the image on a large PC screen. Naturally, it supports both video and 4K PHOTO. This greatly assists professional workflows in commercial photoshoots at studios.

Shoot with extended burst, then choose and extract the exact frames you want to keep. The ultrahigh-speed 4K PHOTO mode at 60-fps with approximately 8 megapixels resolution freezes even faster motion which is simply not possible in conventional cameras. The LUMIX GH5S truly does make moments unmissable.

When shooting dark scenes like starry skies, Night Mode suppresses the stimulation of the eyes that are accustomed to the dark. The LVF and rear monitor can be set separately. The display is brightened by lowering the frame rate and increasing the gain. This lets you shoot while framing, even in extremely dark situations.

Cameras Direct since 2003. Pop into our Gold Coast camera store & warehouse or order online. We look forward to being at your SERVICE Australia wide. We look forward to helping you take a better photo soon. Thank you
#Gh5sAustralia #PanasonicLumixGH5s
More Information
Reviews
Write Your Own Review