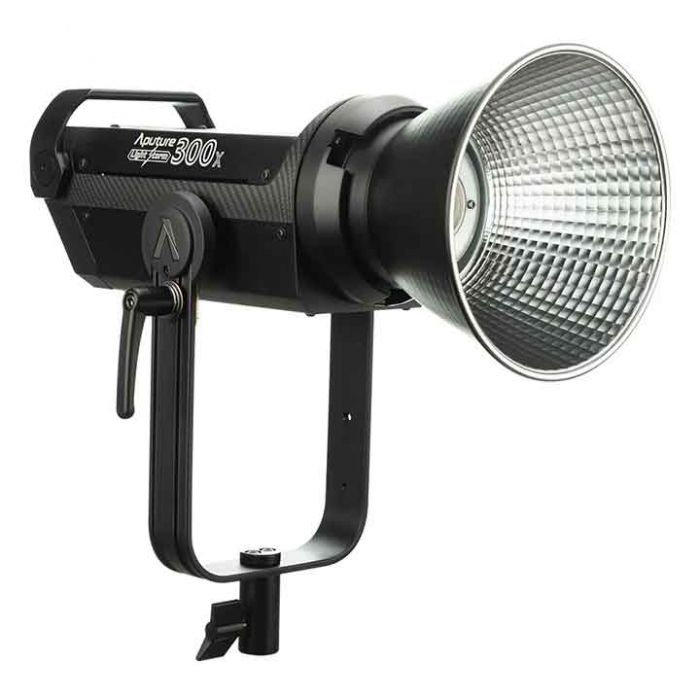 SKU
Aputure-LightStorm-300X-V-Mount-Kit
Be the first to review this product
Special Price $1,616.00 Regular Price $1,899.00
Overview
The 300x is Aputure’s latest flagship Light Storm LED fixture, finally integrating properly mixed variable-white lighting into an easily modifiable point-source light engine. The 300x features a specially designed color-blending optical element in front of its LED light source, combining the bi- color chipset into one cohesive point-source. The combination of this new technology, along with the Aputure ecosystem, allows you to achieve bi-color flexibility never before experienced with Aputure products.
Details

THE FIRST OF ITS KIND

The 300x is Aputure’s latest flagship Light Storm LED fixture, finally integrating properly mixed variable-white lighting into an easily modifiable point-source light engine. The 300x features a specially designed color-blending optical element in front of its LED light source, combining the bi- color chipset into one cohesive point-source. The combination of this new technology, along with the Aputure ecosystem, allows you to achieve bi-color flexibility never before experienced with Aputure products.

With the Fresnel 2X, the LS 300x can produce over 56,000 lux at 1 meter, creating a stunningly bright light, with CCT control always at your fingertips. By having the ability to use lensed modifiers like the Fresnel 2X or the Spotlight Mount, in addition to soft light modifiers like the Light Dome II, you can achieve extreme lighting precision to match any shooting environment. Spot, flood, cut, or diffuse your light without worrying about unwanted artifacts while controlling your white point.

The 300x is the first of many Aputure lights to utilize the expanded vari-white CCT range of 2700K-6500K, going beyond traditional bi-color, allowing you to produce light that is warmer than typical tungsten fixtures, and cooler than conventional daylight (D55). Flexibility with your white light is key to moving quickly on set, so with the expanded bi-color range, that’s fewer gels you have to carry. So whatever your ideal effect is, the 300x will help you create light that will perfectly match your atmosphere.

No matter which light engine you use, color fidelity is always essential, so like all Aputure lights, the 300x sports reliable color rendering abilities. With CRI and TLCI scores of 96+, a tungsten SSI score of up to 85, and a D55 SSI score of up to 74, the 300x will always provide you with top of the line, accurate color reproduction.

The main difference between the two control boxes is that the 300x now sports a new CCT control wheel, in addition to the intensity wheel. The 300x CCT dial allows you to fine-tune your CCT in +/- 50K increments. But with the PRESET button located in the middle of the wheel, you can also toggle between 5 common CCT presets (2700K, 3200K, 4300K, 5500K, 6500K) for quick accessibility.

The 300x even features two output modes: Max Output and Constant Output mode. In Constant Output mode, you can change your CCT precisely while maintaining a consistent luminance level. Combined with a new, smoother dimming system, you even gain the ability to seamlessly shift your color temperature in the middle of a scene. In Max Output mode, however, the 300x will always maximize your output for your CCT and dimming level, with the highest output range being 4000K-5500K. With these two modes, you can do everything from overpowering existing light to tackling precise problems.

Like the 300d II, the 300x can also be operated with a single battery, up to half of its maximum output, or two batteries for full power* — so no matter how many batteries you have, your scene will always shine. The 300x’s control box also accurately displays realtime expected remaining battery life, allowing users to always understand and plan for any filmmaking scenario. By being battery-operable, the 300x gives you greater freedom in lighting, giving you the ability to craft creative images anywhere. *We recommend batteries that support 15A continuous discharge to power the light properly.

The Light Storm product line is all about flexibility, and the 300x continues to support this by being compatible with multiple control methods. In addition to the control wheels, the 300x can be controlled using Aputure’s tried and true 2.4G RF Remote, DMX512, as well as by the Bluetooth Mesh Sidus Link App. With the added range you get from having multiple Sidus Link lights active, you can control all of your lights’ settings from nearly anywhere on set. And with professional DMX512 compatibility, the 300x allows for control through several channels so you can precisely fine-tune your lighting setup.

The 300x also launches with 9 built-in lighting FX, such as, “Paparazzi,” “Fireworks,” “Lightning,” “Faulty Bulb,” “TV,” “Pulsing,” “Strobe,” “Explosion,” and “Fire,” all with adjustable color temperature, opening up new possibilities for precise lighting control on your film sets. The 300x’s capabilities will always continue to grow with firmware upgrades to both the fixture and the Sidus Link ecosystem in the future.

Not to be taken lightly, the 300x continues Aputure’s tradition of being compatible with the Bowens-S Mount, offering a wide variety of both soft light and optical modifiers to choose from, making it a unique bi-color fixture. With the Bowens Mount, you can flexibly change the quality of your light source in seconds. Whether you want a punchy hard light with crisp shadows or a pleasing soft light, never sacrifice output or color quality. The 300x’s Bowens Mount can even be used with other industry-standard modifiers from brands like Chimera, as long as you have a Bowens mount speed ring.

With the integration of the Sidus Mesh chipset, the 300x gives you professional lighting control from a single app. This mesh technology extends across the entire future Aputure product line, creating an ecosystem you can trust. With the Sidus Link Mesh Network created by Aputure products, such as the 300x, 300d II, and MC, you can control up to 100 fixtures from your smartphone or tablet, with each additional light fixture increasing the range of the network. That means every light not only talks to your phone but also to each other, creating a smarter ecosystem. Sidus Link allows you to control every aspect of your light’s output, including luminance, CCT, Effects, and even Light Source presets for fast-paced situations. With its immense flexibility, the 300x becomes an incredibly powerful light, whether you are working on a large film set, or you’re a solo guerilla filmmaker. Meet the latest member of the Aputure Light Storm family.