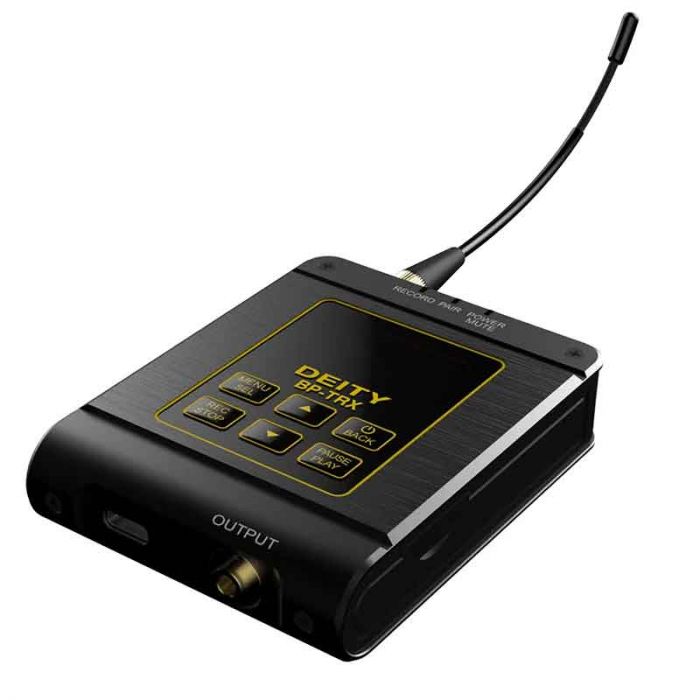 The BP-TRX is more than just a transmitter, it’s a “transceiver.” Which means you can also boot it up as a single channel receiver. But it’s also a pocket recorder for situations when you need a backup recording to protect yourself on those high pressure video shoots. And yet, it’s even more than that because it can also act as a super accurate timecode box. And because it features USB-C, it can service as an audio interface device for your computer or cell phone. It truly is the world’s first all-in-one audio box.

People have been asking us to upgrade the BP-TX and make a single channel receiver, and we decided to do both at the same time. We also upgraded the antenna that’s included with the BP-TRX to create a more stable connection when it’s paired to other devices in the Deity Connect ecosystem.

***Run times vary based on RF Output, if headphones are being used and/or if the unit is recording to the micro SD card. Your battery life may vary. Reducing the RF Output will increase the battery life.

We built the BP-TRX with three safeguards to help prevent you from losing your valuable recorded audio files. The first safeguard is a built-in battery. This eliminates the fear of sudden power failure from a battery door being opened. Secondly the BP-TRX can predict the internal lithium battery’s power depletion curve so it knows when the battery is about to die, automatically saving the current recording before powering down the unit. Lastly we made it so that even if the power button is pressed in the middle of a recording the unit will stop the recording, save the file to the micro SD card, and then power down. Using the BP-TRX screen and button lock can prevent even this last type of user error.

The BP-TRX allows you to set one unit as a Master Transmitter and transmit audio to 4 separate BP-TRX units.

Combine multicasting with the frame accurate built in TXCO timecode clock and you’ve got the ideal kit for camera hops for an ENG or small video shoot.

The BP-TRX can also be operated as a standalone TC Box. When doing so the unit turns off its 2.4Ghz radios and goes into a low power mode so it can operate for +25Hrs.